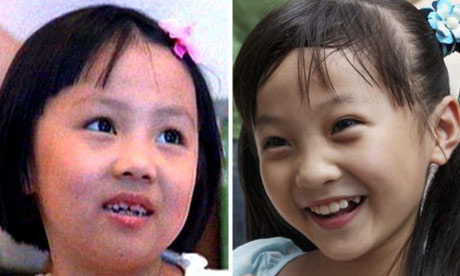 Yang Peiyi was replaced by Lin Miaoke who mimed "Ode to the Motherland" as her face was "not suitable" for the Olympics opening ceremony. Photographs: AFP/ AP

When nine-year-old Lin Miaoke launched into Ode to the Motherland at the Olympic opening ceremony, she became an instant star.

"Tiny singer wins heart of nation," China Daily sighed; "Little girl sings, impresses the world," gushed another headline, perhaps in reference to Lin's appearance on the front of the New York Times. Countless articles lauded the girl in the red dress who "lent her voice" to the occasion.

But now it emerges that Lin was lent someone else's voice, following high-level discussions - which included a member of the Politburo - on the relative photogenicity of small children.

The recording to which Lin mouthed along on Friday was by the even younger Yang Peiyi. It seems that Yang's uneven teeth, while unremarkable in a seven-year-old, were considered potentially damaging to China's international image.

"This is in the national interest. It is the image of our national music, national culture. Especially the entrance of our national flag; this is an extremely important, extremely serious matter," Chen Qigang, the event's general music designer, explained to a Beijing radio station.

Chen said that director Zhang Yimou - who created the ceremony - had demanded a "very cute" child; a standard certainly met by Lin and, many would suggest, by Yang.

"We made the decision that the voice we would use was Yang Peiyi's. The child on camera should be flawless in image, internal feelings, and expression.

"Lin Miaoke is excellent in those aspects. But in the aspect of voice, Yang Peiyi is flawless," he explained.

But at the last minute, officials decided a switch was needed, according to the translation by the China Digital Times website.

"We had been through several inspections - they were all very strict. When we rehearsed at the spot, there were spectators from various divisions, especially a leader from the Politburo, who gave us his opinion: It must change," said Chen.

"I think it is fair to both Lin Miaoke and Yang Peiyi. That is to say, we have a perfect voice, and a perfect image and representation - in our team's view - combined together."

It appears that Lin, already a veteran of TV adverts, may not have been aware that Yang's voice was used. Chen said they had recordings of both girls and their voices were fairly similar.

Yang appears to have taken the snub in her stride. Asked by a CCTV journalist whether she was sad to have missed the opening ceremony, she replied: "No, my voice was there."

Not everyone has reacted so calmly. "Adults may lie, but leave the kids out of it," one angry internet user wrote.

Her tutor, Wang Liping, wrote in her blog that Yang is cute and well-behaved, with a love for Peking opera.

"She doesn't like to show off. She's easygoing," she added. Yang's school could not be reached today.

The switch may reflect underlying cultural preferences as well as the incredible attention paid to Olympic preparations.

Research by Daniel Hamermesh, an economist at the University of Texas, has suggested that the "beauty premium" in parts of China is far more pronounced than in the west for women.

Dr Hamermesh's work shows that ugly people earn below the average income while beautiful people earn more. In Britain, attractive women enjoy a +1% premium. But in Shanghai, the figure was +10%